The Tuna family is one of the most highly regarded fish among serious anglers. There speed, strength, beauty, and potential size make them a top target for many fishers. The most sought after species is the Bluefin family. Within Bluefin Tuna, there are several groups differentiated by size. 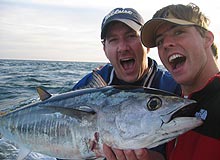 The Giant Tuna are sought for commercial value due to the rising demand for sushi. These fish can exceed 1000 pounds and are in their own league in the world of fishing. Recent seasons have not been very productive for Giants, and the decision to go out depends on the potential for a catch. The season for Giants around Nantucket is in the Fall, and this is rarely an option for charter trips.

The Bluefin Tuna that we do target include the "baby" and mid-range Bluefins. Baby Bluefins have recently populated our inshore waters, allowing us to catch them during regularly scheduled charters. We have had tremendous luck catching them on both fly and spinning gear. The term baby is mis-leading, because these Ôschoolie' Tuna are 20 - 40 lbs and provide amazing fights on light tackle.

The third group - mid-range - consists of Tuna between 50 on 300 lbs. When they are in Nantucket waters, we are happy to take Tuna trips from 10 to 40 miles off-shore. These trip require prior planning and longer than 4 hours. For these Tuna, we use heavier tackle that involves trolling gear. While it is not our usual light tackle fishing, it can be a great experience especially if you are looking to try something new. As with Shark fishing, we will only go after them when conditions and fishing reports point towards success.