Season: All Summer
Best: Late May and June, Late September 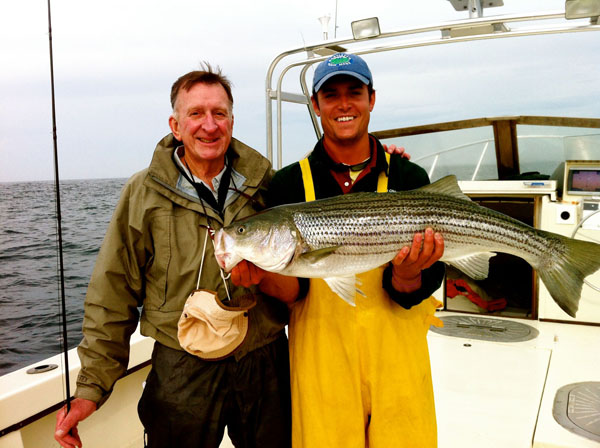 Fishing along the East Coast wouldn't be the same without Striped Bass. Known for their beauty, power, and taste, Stripers have drawn anglers for generations. With the explosion of light tackle, Bass fishing has been transformed from heavy tackle to the sport fishing its now. Traditionally, anglers tried to beat the sun to the water or brave stormy seas (both of which still work!). Many may have laughed when Capt Tom started targeting them with light tackle on the surface, but during Capt Tom's nearly 4 decades fishing Nantucket, he has broadened striper fishing to the flats and almost every other nook and cranny around the island.

Striped Bass reproduce in the Chesapeake and Hudson Bays. A Northern Spring migration extends to Maine's Coast. September triggers their Southern migration. A chain reaction Southward causes Stripers to leave their Summer waters and head back to their breeding grounds. Commercial fishing and pollution in the Chesapeake and Hudson nearly forced these amazing fish into extinction in the '80s. Environmental measures and the expansion of catch and release fishing have brought them back extraordinarily. It is up to every angler to ensure history does not repeat itself.

Striped Bass are great on the fly or spin. While we find them throughout the summer, late May through June is when they feed the most aggressively around the clock. Once late July heats up the water and faster fish like Bonito and Tuna start to compete for food in the daylight, we have to work a little harder and often advise an early morning or evening tide.