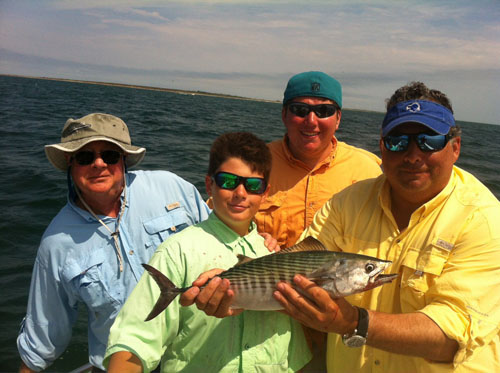 Among the most beautiful fish in the Sea, these fish warrant the name Bonito - Spanish for beautiful. Their visual beauty is accompanied by speed and strength that make them a top game fish on light tackle - spin or fly. Another quality of fish in the Tuna family is great taste. Fresh Bonito is one of the tastiest around and might be best served as sashimi on our boats with some soy sauce and wasabi.

Bonito begin to crowd our waters in early August with some early arrivals in late July. They chases the hordes of Sand Eels around the West End through August and into September. The waters around Madaket are well-known as the best Bonito grounds on the island, and we'll often see boats from Martha's Vineyard searching for Bonito off Smith's point.

The best area is known as the Bonito Bar. Fortunately for us, it is only 15 minutes from our dock, and we can easily try our hand at some "Bones" on the way to or from other fishing grounds. Its also nice to have a few secret Bonito spots away from the crowds on the Bonito Bar.

Whether you've been hooked by the beauty, speed, and power of these fish or you want to try it for the first time, we look forward to getting you hooked up to some of these speedsters.