Bluefishing is inherently linked to the history of Nantucket. Generations of Islanders have hurled plugs into the surf hauling in big ferocious Blues. The waters around Nantucket have maintained a world-class bluefishery that attracts more anglers year after year. Many believe that our waters offer the best Bluefishing on Earth. 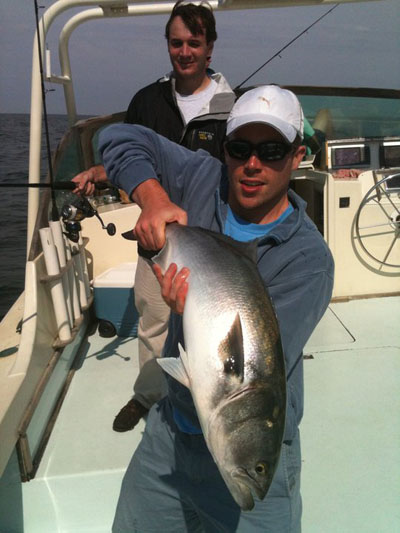 Bluefish embody the best of what sport fishing has to offer. They are known for their hard fights, and Nantucket has some of the biggest Bluefish anywhere with average sizes ranging from 8-15 pounds. Their aggressive feeding habits causes them to chase surface lures with reckless abandon often causing several at a time to launch far into the air in pursuit of a surface lure. While Bluefish have developed a reputation for tasting badly, there are many - including our entire crew - that love the taste of fresh Bluefish. Probably the only reason many anglers turn away from Bluefish is their abundance. This is true, and the challenge offered by striped Bass and other species is understandable, but the resilience and abundance of Bluefish are celebrated on Nantucket.

Beyond the great numbers of Bluefish around Nantucket, their behavior is unlike most other fishing locales. Many clients are initially hesitant to target Bluefish, saying they've caught plenty before. Nantucket Blues are distinct from their kin in other waters. Our Blues are big and spend most of their time at the water's surface. While trolling with wire lines and dragging in a n 8 lb Bluefish may not excite many anglers, the chance to evoke acrobatic strikes with light tackle - fly or spin - can cause the most seasoned angler to act like a wide eyed rookie.

We invite you to experience the world's best Bluefishing for the first or fiftieth time. Those new to fly-fishing should take advantage of the aggressiveness and abundance of Nantucket Bluefish. It is a great way to hone your casting skills while putting a gigantic bend in your fly rod. We promise that you'll be hooked for life.