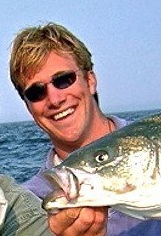 Raised on fishing stories from crew and clients alike, Jason couldn't wait to get to work on his father's boats. He spent 5 years working as a striker before becoming a captain in 2001. He easily explains why people see a lot of Tom in his fishing style and overall demeanor - "He taught me everything I know." This may be true, but Tom is quick to point out that they now learn from each other.

Beyond his father, Jason credits the people he fishes with for much of his knowledge. His ability to learn from each person he interacts with has given him a distinct fishing style with impressive results.

Growing up on Nantucket waters and his father's passion for the oceanhas given Jason a great appreciation for everything the area has to offerand an uncanny understanding of the fish that swim here. This qualitywas enhanced after studying Marine Geology and Biology at HamiltonCollege. Jason has since fused science with his growing first-hand experiences to get closer to thinking like a fish each day.

Equally important is Jason's ability to positively interact with many different anglers in a wide range of situations. Like all of Captain Tom's crew, he brings the best out of people and shows them the best of Nantucket.

When fishing with Tom or Jason, you can sense not only a passion for fishing and people, but also for education. This led to 26 years of teaching and coaching for Tom, and led Jason down a similar path in 2005 when he began teaching middle school science and math while coaching ice hockey and lacrosse - both of which he played at Hamilton College where he earned All-American recognition as a lacrosse goalie.

This devotion to people is an asset shared by anyone found on Capt Tom's team, and Jason credits much of his father's success to his unwavering commitment to the enjoyment of his anglers, which goes far beyond simply catching fish.

Growing up, he remembers the first lesson his father ever taught him about the business. Whenever little Jason would ask, "How was your trip?" or "What'd you catch?" his father would always reply, "We had a great time." While this didn't appease the curiosity of a 10 year old, Jason soon realized that this was the heart of Capt Tom's Charters - it's a people business. Jason has never forgotten that. Besides, the fishing here takes care of itself!